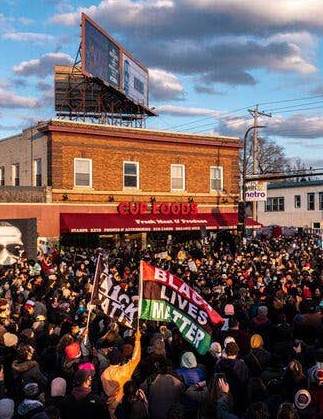 This has been decades coming, where there is very rare accountability for police violence in the murder of George Floyed.  As I am thankful for this verdict though I am saddened that Black people are still being maimed and murdered due to police violence.  The recent deaths by police of Ma’Khia Bryant (16), Daunte Daunte Wright (20),  Adam Toledo (13) and countless others remind us that real justice is when we are free from police violence.

May we work for a world free from racism and all oppressions so we can get to the permanent “Beloved Community” Dr. King spoke about.

Let me start by saying that people of color in these United States of America are living under the threat of terrorism. The Chauvin verdict just gave some relief to the family in order that what happened won’t go unrecognized but what would it fulfill justice in the Floyd case or any of the other victims of Police terrorism?

In the Botham Jean case in Texas where then police officer Amber Guyger shot Mr. Jean in his own apartment where the officer stated she had mistaken as her own. She was charged in that case and received a 10 year sentence, which will make her eligible for parole in 5 years. This is not justice; justice is being able to drive down the street, or walk on any street without fear of reprisal by anyone especially the police who are to protect and serve. A person’s skin color should not make it open season to the police to harass and murder.

But, until the truth is told about how this country was really conquered we will continue to have terrorism because the same tactics continue to be used in this society. Look at Wounded Knee in southwestern South Dakota an Indian Reservation that was the site of two conflicts between North American Indians and representative of the U.S. government.

An 1890 massacre left some 150 Native Americans dead. Or Oklahoma where in 1921 Where 300 African Americans were killed when a white mob attacked the Greenwood district of Tulsa, a thriving black community and burned it to the ground. I said all of that to say this, until white people recognized that this country continues to live out its history of  racism, and that the true history of this nation has to be told exactly the way it occurred we will continue to have terrorism of people of color.

Finally, these systems that continue to perpetuate the same ideology has to be dismantled Starting with this country’s current ways of policing. The very individuals that are policing come from a community what are they bringing with them?  This is just my opinion;